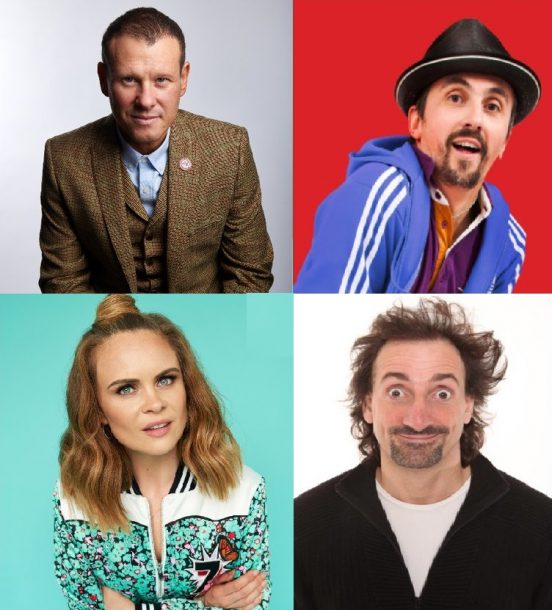 Manford’s Comedy Club was launched by comedian Jason Manford and his brother Colin just over two years ago. The idea was to bring comedians from the UK circuit to small towns and cities across the country for a night of live comedy. The show features up and coming performers as well as more well-known names and are all personally chosen by Jason himself. The aim of the pop up shows is to put top-quality comedy in front of local audiences at a good price. A great evening of original and hilarious comedy.

Joanne McNally – Joanne McNally burst onto the Irish comedy scene in 2014, and in less than a year in the business, she became the co-host on RTÉ 2’s flagship comedy show ‘Republic of Telly’, and has recently hosted Presenter on Republic of Telly RTÉ2 , Women on the Verge RTÉ 1, and Soft Border Patrol BBC One.

Markus Birdman – One of British comedy’s most experienced and well travelled performers. In demand all over the UK and abroad, Markus is a veteran of the Edinburgh Fringe with many solo shows to his credit and headliner status at all the top clubs. He’s performed at the Melbourne, Adelaide, and Perth Comedy Festivals and was nominated by the New Zealand Comedy Guild for Best International Guest

Maff Brown – Gigging everywhere from the Comedy Store to the Glees to the Komedia’s to Off the Kerb’s and to his own award-winning Outside The Box Comedy Club. Maff Brown was recommended as one of the top ten thing’s to see at the fringe by GQ, twice! (2012 & 2014) Regular headliner and host, Maff has also been a support act for Greg Davies, Andy Parsons, and Jack Dee. Maff Brown is also a writer at Mock The Week.

Addy van der Borgh –  Addy van der Borgh has that rare talent of making people laugh as soon as he walks on stage. He is a great performer of highly acclaimed and original material, an ability noticed immediately by the BBC when he appeared on the ‘Stand-up Show’on BBC1 after only one year as a comedian.

*Line-ups are subject to change