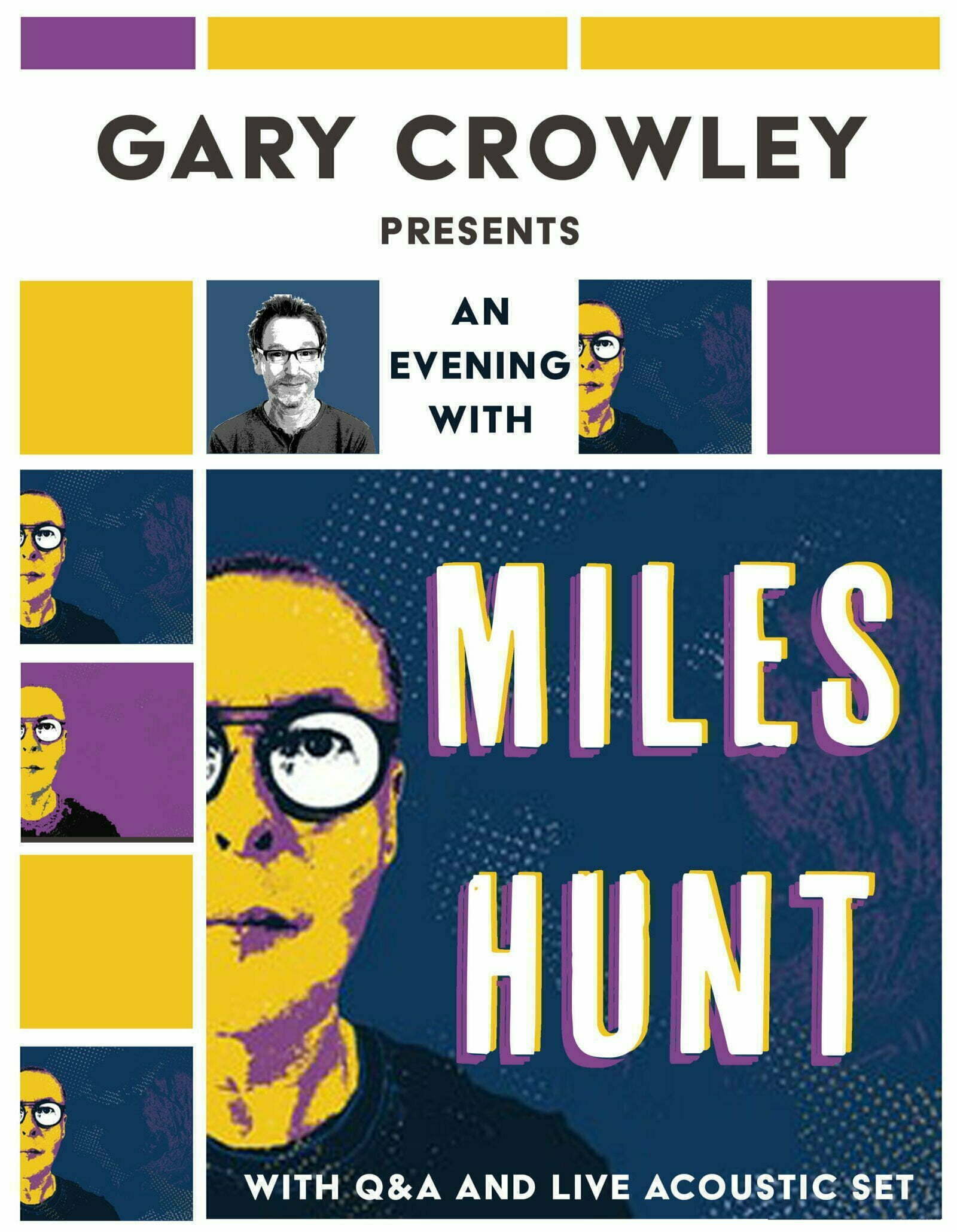 Gary Crowley (BBC London) presents an evening with Miles Hunt of The Wonderstuff featuring a Q&A and a live acoustic set.

At the age of twenty, in the midst of a burgeoning British independent music scene, Miles Hunt formed The Wonder Stuff. The band went on to score four Top 20 albums and seventeen Top 20 singles, including the Number One hit ‘Dizzy’ with Vic Reeves. In the mid 1990’s he hosted MTV Europe’s ‘120 Minutes’ alternative music show and became one of the first DJ’s on Xfm. Hunt continues to perform internationally both acoustically and as The Wonder Stuff.  He has published three books “The Wonder Stuff Diaries ’86 – ‘89, ’90 – ’91 & ’92 – ‘94”.

During 2020’s lockdown Hunt performed a series of Facebook Live shows, averaging 2 to 3,000 viewers on each occasion. This inspired him to record a second volume of ‘The Custodian’, featuring a further thirty acoustic versions of songs cherry picked from his thirty-five year career as a recording artist. Hunt says of his Facebook Live experiences “I only lost a handful of shows due to the CV19 lock down, unlike a fair few of my fellow musician friends I lost very little income, I was fortunate. So I did my Facebook Live shows in the spirit of bringing a little cheer into the lives of the wonderful people that have stayed with me all of these years. And I have to say they were very emotional experiences. There were a lot of people that were contacting me during the shows that were having a really rough time. I felt blessed that they chose to share that with me and extremely humbled that I was able to give them a bit of relief from their troubles.” ‘The Custodian 2’ features songs from The Wonder Stuff’s mighty arsenal as well songs from Hunt’s other band, Vent 414, and records he has made with Erica Nockalls as well as his solo releases

Is an English broadcaster, TV presenter and DJ. While still at school in the late 1970s Gary Crowley founded the new wave fanzine “The Modern World” interviewing many of the most significant bands of the day including The Sex Pistols, The Clash and The Jam.

On leaving school in 1978 Crowley took up a junior position at Decca Records before joining the staff of the NME, taking over from Danny Baker as the telephone receptionist at their offices in Carnaby Street. At this time the weekly music paper was at the centre of the post punk explosion.

Crowley’s knowledge and passion for music attracted the attention of broadcasters and in 1982 he was hired by London’s independent commercial station Capital Radio, and aged 19 became the youngest radio DJ in the UK. Throughout the 1980s Gary Crowley became a prolific broadcaster / promoter, hosting regular club night where he showcased many prominent chart acts at early points in their career, including The Style Council, The Bluebells, Wham! and others. TV presenting followed and he was the main face on programmes such as Earsay, ReVid, Poparound and The Beat through the 80’s and 90’s.

Gary has worked within the music industry in many guises but his true love and passion is radio broadcasting. He continues to present the Saturday early evening show on Radio BBC London.

This year saw the follow up release “Gary Crowley Lost 80s 2” to the acclaimed Top 40 compilation ‘Gary Crowley’s Lost 80’s’ which again is another eclectic collection of under the radar gems from major 80s names as well as those who got away.

A long time champion of new music, he’s given many new bands/artists their first taste of radio exposure, with the likes of Suede, Dodgy and Bush in particular all going into bigger and better things.

Fortunate to have met a lot of his ‘heroes’ and make friends with a few, as Gene Hunt once said in Life On Mars “he’s got more fingers in more pies than a leper on a cookery course!”